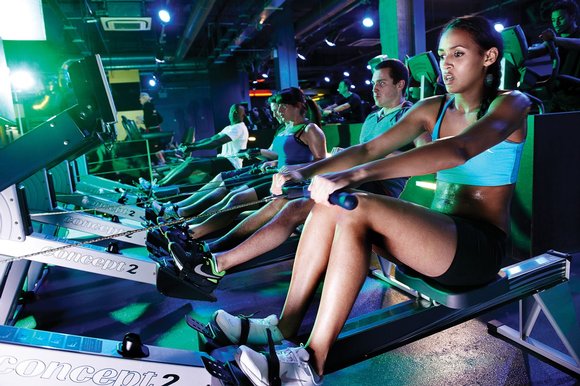 RICHARD HILTON was a skinny 19-year – old when he arrived in New York. He had left suburban London eager to pursue a career in advertising — but first he wanted to build some muscle.

“I joined a gym with wooden floors and white walls,” he said. “It was so sterile I quit after three months and swore I would never go back.”

Months later he was enticed to a new gym, with live music, disco lights and combat classes. “It wasn’t just about lifting weights. There was a non-judgmental atmosphere,” he said. “I loved the brand.”

Hilton spent the next nine years building a career in advertising, all the while enjoying his alternative workouts. When he transferred to London with McCann Erickson in 1998, he was disappointed the concept had not crossed the Atlantic.

“The offering in Britain was atrocious. Gyms were buying the same package classes off the shelf,” he said.

“We decided not to use gym designers because they give you exactly what we were trying to avoid,” said Hilton, who is chief executive of the chain. Interior design is a key feature of the studios.

Gymbox offers an “eclectic” mix of about 100 classes costing £10 to £15 each. They include show wrestling, American football fitness, pole dancing and rave yoga, involving trampolines, glow sticks, laser lights and live music. “Our unique selling point is to try to deliver these great classes,” said Hilton.

Priority booking is given to members, of which Gymbox has 15,000 paying £65 a month on average.

“The creativity of the classes is something the members love, but that’s not to say every single class always works,” said Hilton. “We try new things, like yoga boxing, and the feedback suggests we have pushed too far.”

In the early days Hilton needed a backer to realise his vision. He secured Fitness First as a silent partner in 2003, but he bought back its stake just a year later.

“I didn’t have any independent money, so getting Fitness First on board was a huge leap for us,” said Hilton. “When Gymbox took off, the partnership was cut short as we had different aims for growth.”

Today Gymbox’s management team, headed by David Cooper, owns about 85% of the business, with Hilton having the majority share. “I have the best team in London,” he said. “We’ve been in and out of private equity for several years; that wouldn’t have worked without them.” In July last year the remaining stake was sold for £10m to the Business Growth Fund, which is backed by the big banks.

“Access to finance has become a lot easier as we have proved the business model,” said Hilton. “I’m happy to create more gyms with the cash but only if they are all beautifully executed — I want to ensure the reason for the brand’s success is not lost in growth.”

The American gym he “fell in love with”, called Crunch, did just that. “When the founder left, the original vision in the 1990s was lost. Our policy is to have no tired gyms and keep the momentum.”

Richard Hilton of GymboxHilton, 44, was born in Birmingham and grew up in Northwood, northwest London. His father ran his own ad agency, Hilton Advertising, while his mother brought up Hilton and his younger brother and sister.

He boarded at Clifton College in Bristol, going on to complete a diploma in advertising at Watford College before leaving for New York. “I thought Madison Avenue seemed like a good place to start, so off I went with a suitcase and a CV.”

Hilton got his first job at Grey as an assistant media planner. He moved to Publicis before becoming an account supervisor at McCann Erickson in 1996. Two years later he transferred to McCann London before joining Wieden + Kennedy as an account director in 1999.

“Advertising is a brilliant background for anybody,” he said. “You learn how to talk and how to sell. At Gymbox it’s all about tone of voice, branding and communication with members.”

Gymbox is aimed at the 18-35 age group. “That’s not to say the environment shouldn’t be welcoming if you are 60,” said Hilton. “We have a 70-year-old kickboxer — we just choose to speak the language of a certain generation.”

Hilton lives in Hampstead, north London, with his wife, Kate, a civil servant, and their four children.

His advice to entrepreneurs is: “If you’re passionate, you care and you have a point of difference, the money and success of your business should ride off that. It’s dangerous running a company for the sole purpose of making money.”