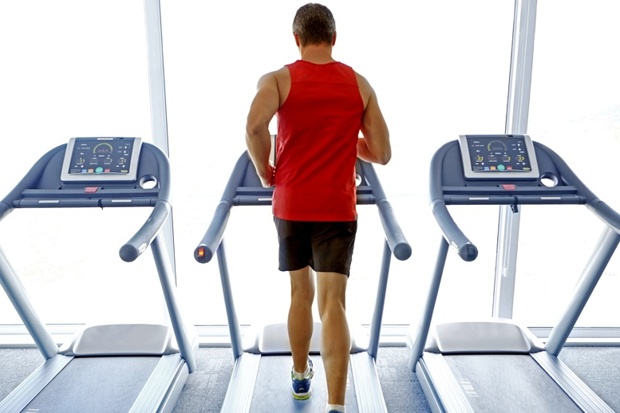 Like a lot of middle-aged family men, Dave Goldberg liked to make use of the hotel gym when he was on holiday. Getting some time to yourself when you’re a Silicon Valley executive is hard enough, but having committed to a “shared earning/shared parenting marriage” with one of the world’s most influential businesswomen — Facebook chief operating officer Sheryl Sandberg — every moment of me-time was probably precious for the 47-year-old.

“I proactively manage my time and commit to things that are important, like dinner with family,” the chief executive of SurveyMonkey told Fortune magazine two years ago. His wife and children came first, but he was also conscious of the necessity to stay in shape. In the mornings that meant spending 30 minutes on his elliptical trainer in the gym of the family home in Menlo Park, California. “While I’m on it, I play video games on my Xbox,” he toldThe Sunday Times last year. At work, where he used a standing office desk because of recurrent back problems, he had a treadmill “for when I’m busy with calls or taking a break”.

Given his experience and confidence with gym equipment, it seems all the more incredible that Goldberg’s early evening workout last Friday at a private resort in Mexico ended in tragedy. When he failed to return to his room, his brother, Robert Goldberg, went to look for him and reportedly found him lying in a pool of blood next to a treadmill, apparently with an injury to the back of his head. Sources say the official cause of death was severe head trauma and hypovolemic shock, or bleeding, the result seemingly of a freak accident.

Of all gym equipment heralded as a life-changer for the stressed-out, the middle-aged and the overweight, treadmills are unwaveringly the most popular. Yet as innocuous as they seem, the treadmill is the most dangerous item to use at the gym. Surveys by the US Consumer Product Safety Commission cite them as the most likely cause of a gym accident, with broken bones, sprains and twisted ankles, amputated fingers and concussions among the injuries they cause every year.

Most recent statistics from RoSPA, the Royal Society for the Prevention of Accidents, suggest that close to 2,000 injuries occur on home treadmills every year and almost 1,500 in UK gyms. We set them too fast, forget to switch them off and foolishly jump aside mid-run or get distracted by our high-tech gadgets when we should be focusing on exercise.

Yet for stressed-out executives they remain unchallenged as the go-to equipment of choice. Rowing machines are too hardcore and bring to mind the stroke experienced by Andrew Marr when using one; spinning bikes are too feminine. Only on a treadmill are we promised the rawness of a form of exercise that is manageable, at one pace or another, to all.

With the launch of a new wave of equipment that mimics the feel of trail running and, according to the manufacturers, is kinder to joints and connective tissues, there is not even the worry of joint pounding that comes with running on roads and pavements.

Little wonder that sales of home treadmills are at an all-time high, but it doesn’t end there. Fashionable classes involving group sessions on the gym conveyor belt are also attracting a breed of male runner that tends to be slightly portly and aged 40-plus. Lured by the competitive nature of classes such as V-Tread at Virgin Active and Precision Running at the Kensington branch of the luxury gym chain Equinox, hordes of middle-aged men are revisiting the treadmill in the hope of testing out their running legs against the person on the adjacent machine.

“Our male members love the treadmill and they love an element of workout competition,” says the Equinox treadmill coach, Caitlin McGowan. “They have never been so popular among men of a certain age group.”

Yet Sammy Margo, a spokesperson for the Chartered Society of Physiotherapy, knows to her cost how dangerous treadmill running can be. An experienced runner, Margo was training for a 10km race eight years ago and had invested in a treadmill so that she could run at home. However, she was not expecting the machine to be a fast route to A&E.

“I was running at a decent pace when I misplaced one foot, landed on my chin and my head went into extension,” she says. “I was badly concussed and rushed to hospital.” Margo recovered and resumed using a treadmill some months later. “It was a shock to me as the injury was random, but serious,” she says. “I was used to running, but perception of pace is sometimes different on a treadmill. It can move faster than you expect and that’s why I think my injury occurred.”

Search for “treadmill accident” on Google and you can see hundreds of dramatic videos of the force with which joggers can be thrown if they lose concentration while using a treadmill, which is very easy to do when you’re in the zone and you forget technique and safety measures, says Steven Ward, executive director of ukactive, the body that represents gym industry and fitness suppliers in the UK.

“Our own surveys show slips, trips and falls account for the majority of gym-based injuries,” Ward says. “Treadmills are not inherently more dangerous, but they are used more often and therefore a greater number of injuries occur using them over other machines.”

Listening to music, working on a laptop or even texting have become common treadmill practices, but are ill-advised, Ward says. “A loss of concentration on the activity you are doing usually precedes a treadmill accident. It’s also not recommended to hop on to a moving belt or to jump to the back and sides before the machine has come to a halt.”

Looking at the statistics for treadmill injuries, one of the biggest surprises is the incidence of injury in a second age group — the very young. For children, the risks of home treadmills are heightened. Electric cables and moving parts are a magnet for inquisitive minds and small hands, sometimes disastrously so. In 2009, the former boxer Mike Tyson’s four-year-old daughter died after being strangled by a cord on a treadmill in his home. Exodus was found by her brother while her mother was cleaning another room.

While deaths remain thankfully rare, serious injuries are common. In 2012, a group of plastic surgeons warned that an increasing number of children were suffering deep friction burns from touching motorised belts when they are moving. In a study published in the journal annals of the Royal College of Surgeons, the researchers from the Welsh Centre for Burns and Plastic Surgery at Morriston Hospital in Swansea and Birmingham Children’s Hospital logged 29 such injuries between January 2006 and December 2010.

Many of the children, aged between one and thirteen, were severely hurt, with more than half needing skin grafts, and more than two thirds suffering deep burns. Sixteen of the twenty-nine cases studied had trapped their hands or forearm under the belt of the treadmill when an adult was walking or running on it. In one case, a toddler got trapped beneath the belt and sustained a burn to the nape of their neck. Prakash Lohana, the plastic surgeon who led the study, says the popularity of home gym equipment has caused a sharp rise in such incidents.

In a further survey he conducted at Glasgow Royal Infirmary, eight treadmill-related injuries in children were treated in one month. “Children think treadmills are toys and can’t resist playing on or near them,” says Lohana, “but belts are motorised and don’t stop when they touch them. Burns are small but exceptionally deep.” Parents should keep any home exercise equipment unplugged so children can’t start the machines on their own. “It should also be positioned so parents can see children approach the equipment when they are using it, preferably with a back mirror,” Lohana says.

It would be unfair to single out the treadmill without highlighting other potential pitfalls at the gym. After all, RoSPA says that step machines and other exercise equipment, such as rowing machines, mini trampolines and bursting gym balls, can be hazardous. Even elastic resistance bands have claimed victims, including US minority senate leader Harry Reid, who was left with a severely injured eye and four broken ribs after working out with them at home in January.

One of the bands snapped, injuring Reid’s right eye and flinging him into a filing cabinet so badly that he needed surgery. Then there are weights and the urge to lift heavier than we can manage or, indeed, to wilt and drop them. Two years ago, a study of more than 25,000 people in The American Journal of Sports Medicine revealed that mishaps with weights and resistance machines were more common than ever and that they spare no body part or age group.

Findings showed that more than 90 per cent of weight-room injuries were incurred using free weights, which were responsible for 24 per cent of fractures and dislocations. Yet sprains and strains to the upper and lower trunk were also widespread and in two thirds of cases resulted from people dropping weights on themselves.

Margo says she has treated numerous clients who have been badly injured after tripping over weights and dumbbells left lying around by other gym members. “People put them down anywhere without thinking,” she says. “One lady I treated had fractured her shoulder after tripping over an abandoned weight. Another broke her wrist and several clients have badly sprained ankles this way.”

It is, though, the treadmill that retains the most calamitous reputation, our love affair with its whirring belt tempered by the perils that come with hopping on. “On the convenience front they do a fantastic job,” Margo says. “Everyone pushes some personal boundaries when they exercise, but we all need to be aware of the occupational hazards that come with working out. Treadmills are a fast route to good health, but they can be deadly if you don’t use them in the right way. We need to bear that in mind.”

Other health hazards at the gym

Stepping machines
According to RoSPA, the latest figures available suggest that an estimated 21 injuries requiring hospital treatment a year occur on home machines and 267 on gym steppers.

Weights
A 2010 study of 927,000 people in the US showed that women were more likely to injure their feet and legs using weights, while men’s injuries were more common in the trunk and hands. Lifting weights that are too heavy, using bad technique or dropping them are the main causes.

Skipping ropes
In a 2009 US survey, skipping-rope injuries resulted in 169 hospital admissions for concussions, contusions and sprains. In one case, a rope’s handle hit a 53-year-old man in the eye.

Gym balls
Injury insurance claims have been made against manufacturers when balls burst, sending users hurtling to the floor. One European manufacturer settled a lawsuit with NBA star Francisco Garcia and his former team, the Sacramento Kings, for injuries he sustained through the explosion of a stability ball.

Mini trampolines
More adults than ever go to A&E with trampoline injuries. Some are incurred when adults use garden trampolines, others when they bounce incorrectly on mini fitness versions. Sprained and twisted ankles, broken wrists and knee injuries are the most common complaints.