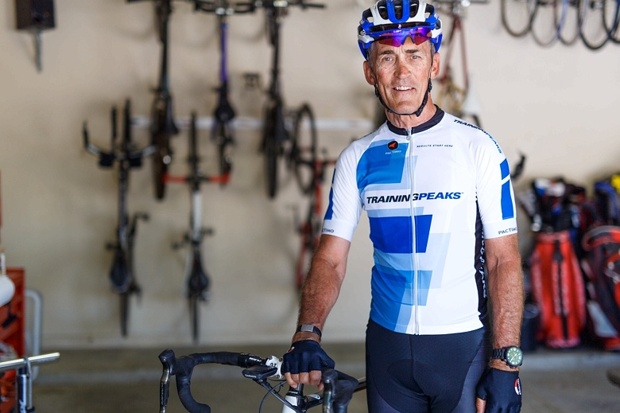 Forget gentle workouts, leading fitness trainer Joe Friel, aged 71, says we should train with more intensity as we get older.

As America’s leading endurance sports coach, Joe Friel, 71, has many reasons to be interested in the toll that ageing takes on fitness. He is an elite triathlon and cycling instructor, has coached sportspeople of all ages and abilities, and is the author of more than a dozen books for athletes including the bestselling Training Bible series. His curiosity about whether people can extend their sporting activities into the decades beyond middle age also has personal resonance. “I was approaching my 70th birthday and I was wondering what to expect. The number was scary because of the drop in fitness and performance that’s supposed to happen,” he says.

For the fitness enthusiast, growing old can be particularly tough. After a lifetime of being active, suddenly he or she is told to avoid strenuous exercise or risk broken bones and heart attacks. Cyclists, runners, swimmers, skiers, rowers and triathletes do not want to be told that they should potter around in the garden or do a bit of gentle swimming, says Friel. Though reluctant to take it easy, they acknowledge that their bodies are changing. They are slower to recover after workouts, for example, and want to know how to address these changes. This week, research reported in the British Journal of Sports Medicine from studies monitoring a group of over-60s for ten years, showed the importance of exercise. Even those who exercised but failed to meet the recommended target of at least 20 minutes a day still were 22 per cent less likely to die during the study period than those who did no exercise. Those who did manage the recommended target were 28 per cent less likely to die.

Six months before his big 7-0, Arizona-based Friel set out to look at all the research on ageing and sport. He wanted to pin down why some older athletes are regarded as “legends” by younger athletes for their continued fitness, while others appear to age quickly and see significant drops in performance. Is there an athletic fountain of youth?

In his latest book, Fast After 50: How to Race Strong for the Rest of Your Life, Friel explains that vigorous exercise is possible well into your 50s, 60s, 70s and beyond. “We’re capable of achieving far more than we are currently accomplishing if we learn what’s happening to the ageing body and gently coax it to greater fitness,” he says.

Where fitness is concerned, the three main downsides of ageing are as follows: firstly, decreasing aerobic capacity because the maximum amount of oxygen consumption measured during exercise declines at the rate of ten per cent or more per decade — and muscles need oxygen to work. Secondly, body fat will increase because the basic metabolic rate slows down, often resulting in weight gain — mostly fat. Lastly, muscle shrinkage: muscle mass decline begins during your 40s but decreases more rapidly after the age of 50, due largely to a decrease in anabolic or tissue-building hormones.

There are other consequences too, such as reduced bone density and joint motion, which can lead to an increased risk of injury and a weakened immune system.

Friel acknowledges that while these signs of ageing sound depressing, most of what we know about the process is based on “normal” subjects — sedentary old people like our parents or grandparents who saw their later years as a time to take it easy and snooze in armchairs.

With baby boomers now in their 50s and 60s there is more positive research about ageing, thanks to people who push their physical and mental limits. “It appears that about half the loss is due to a sedentary lifestyle, not ageing per se,” says Friel. Therefore, though genetics play a part in ageing well, many of what we consider to be inevitable changes are in fact things that we have some control over.

As we get older there can be a tendency to lighten the training load. Friel, who trains 15 hours a week on his bike, said he experienced this. “From my mid-60s I was doing less weight training, more long, slow, distance runs and fewer high-intensity workouts,” he says. “It wasn’t an intended change, it just kind of crept up on me.” Plus, he had the beginnings of a belly that he found harder to shift because of his changed workouts and the hormonal changes brought on by ageing.

A daily diet of easy workouts “won’t get the job done”, the American coach declares in his book, and he sets out the four areas of training to focus on in later life:
Workout intensity

In any sport, as we age there is the tendency to increase duration of workouts at the expense of intensity, Friel says. Workouts become longer and slower. And yet you should be doing just the opposite. “Research shows that with athletes who maintain high intensity training, their decline is slowed by about 50 per cent compared with athletes who do lots of long, slow, distance training. There’s considerable evidence that supports this conclusion.” Training should be two or three times a week with an emphasis on muscular endurance, anaerobic endurance and sprint power.

Muscular endurance involves long workouts — for example running or cycling for a long period of time. Anaerobic endurance involves working out above the anaerobic threshold (where your body starts to produce lactic acid) for shorter intervals — running or cycling hard for a minute at 80 per cent of your maximum heart rate then recovering. Sprint power involves high-intensity workouts at maximum power for very short periods of time.

These workouts help to maintain muscle mass and stimulate testosterone release (this hormone, which aids muscle growth, is produced by both men and women, though women produce less, and its production declines as we age).
Strength training

Lifting weights is one of the best ways to build bone density while also stimulating testosterone release to maintain muscle mass. An alternative for the cyclist or swimmer who prefers not to use heavy weights on their legs in the gym is walking or running for several miles each week. This type of training should be done regularly and frequently, depending on your individual level of fitness. “Research suggests that you can rebuild bone and muscle no matter how old you are,” says Friel. Over-50s athletes should be cautious about introducing intervals and weight training to avoid injuries, he continues, but when practised safely and increased gradually, the regimen is the surest way to stay strong and competitive.
Sleep

Older people cannot afford to burn the candle at both ends. Friel writes that the purpose of sleep is the growth and rejuvenation of the body — the muscular, skeletal, immune, nervous systems. Several studies have found that the amount of sleep people get is closely associated with not only health but living longer.

Short sleep durations can increase the risk of obesity, heart disease and type 2 diabetes. Aim for six to seven hours per night. “Sleep is critical to sport success,” says Friel. “The standard I use to determine if someone is getting enough sleep is [whether] they have to use an alarm clock in the morning. [If they do] they haven’t had enough sleep. Go to bed earlier.”
Nutrition

Protein plays an important and unique role in recovery. “The research shows that, as we get older, we need more protein in our diet. We need to replace carbohydrates with protein, which is anabolic and promotes muscle growth,” says Friel. Overdoing carbohydrates is likely to lead to an increase in body fat because insulin secretion interacts with another chemical in the body, lipoprotein lipase (LPL), to store fat, he writes in Fast After 50. “When we are younger, testosterone keeps LPL in check, allowing us to eat lots of carbs without increasing fat, but that changes with age because testosterone decreases in both women and men.” Dietary needs also change with physical shifts, and Friel says he has changed his diet at two pivotal times in his life. “The first was in 1994, shortly after my 50th birthday, when I was eating a lot of carbs because I was an endurance athlete. A friend tried to convince me to cut back on the refined carbs and eat more vegetables, fruit and animal products.”