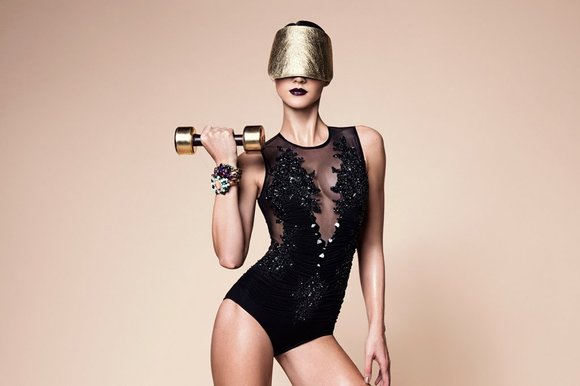 Weightlifting will help you lose fat, strengthen bones and improve your mood, all without building bulk. Start working with the heavy stuff

Delicately untucking a strand of hair from the 105kg barbell that’s currently resting on her shoulders, Mili Leitner proceeds to squat. And squat. And hold it. Drop. The bar falls to the floor with a satisfying clang. Standing at a petite 5ft, in hot-pink Nike shorts, the 24-year-old Leitner has just finished lifting more than double her body weight: a personal best. “At the end of each session I like to add up how much I’ve lifted from every rep in each set,” she says with a sweaty grin. This morning, after an hour of squats, deadlifts and bench presses — the three lifts that make up powerlifting — it was more than 10,000kg.

A year ago Leitner would have ignored the free-weights section of the gym. A dedicated runner, she would pound the pavements three times a week. Then the monotony got too much. On the recommendation of a friend, she studied the basics of lifting from YouTube tutorials. It wasn’t long before she was hooked. “Lifting is empowering on a really basic level,” she says. “It sounds stupid, but it’s quite liberating being able to carry your shopping up the stairs without gasping for breath.” Now she’s hung up her running shoes permanently and is a regular at the specialist weights gym where we meet, Metroflex in Sydenham, London.

Adult women’s muscular endurance peaked in 1985, and has dwindled by up to 10% since then

There’s never been a more crucial time to dust off the weights: research done last year found that adult women’s muscular endurance peaked in 1985, and has dwindled by up to 10% since then. “I think no one really emphasises the benefits of strengthening muscles,” says Professor Nanette Mutrie, chair in physical activity for health at the University of Edinburgh. “It increases your strength and power, keeps your bones and joints strong and therefore less prone to injury, and also keeps your body composition at a healthy level.”

My own attempts at strength training have always been limited to the strict confines of my living room (no one needs to see me flail around with 1kg sets to a Jillian Michaels DVD).

But swapping my usual hand weights for a fully loaded barbell in a session with Leitner, there is something captivating about hitting those personal bests with others in the ring. After an hour I can squat 35kg, bench-press 20kg and deadlift 50kg.

It helps that the low-weight, high-rep approach typically considered the route to a “long and lean physique” has been called into question. One study found that lifting at 85% of your maximum effort for eight repetitions versus 45% of your max for 15 reps burns more energy and boosts the metabolism. “If the correct technique is applied, lifting heavier will yield greater results. It activates far more muscle fibres and requires more energy for less time,” says Hilary Rifkin, a personal trainer at the seriously chic Lomax gym in Chelsea — if you needed any further reassurance that heavy lifting has moved beyond grimy fight clubs, this is it.

“The trouble is that women, including myself before I started training with weights, truly believe any form of exercise that incorporates weightlifting will give them a more masculine physique,” Rifkin says. Yet even at higher levels of intensity of training, women cannot build muscle in the same way as men: although women do produce testosterone (an important hormone in building muscle), the levels are much lower than in their male counterparts.

“Weightlifting conjures up images of wiry, perma-tanned body­builders with preposterous boob jobs, which is definitely not what I look like,” says Laura Watson, 23, who took up lifting a year ago after being impressed by the female effort in the 2012 Olympics. Her boyfriend built her a free-weight rack in her bedroom, which she now uses as part of her normal workout: “You just have to look at top weightlifters such as Zoe Smith to see that women can be incredibly strong and still feminine. It’s given me leaner and more defined muscles, and I’m more confident in my body. I used to worry about looking skinny, but now I focus on being fit and healthy. I feel much more attractive.” It’s true; after a morning of reps with Leitner, I’m in a gung-ho, endorphin-fuelled euphoria for the rest of the day. Even the stiffness in my newly discovered muscles in the days that follow is a kind of enjoyable badge of honour.

“It’s pretty addictive,” Leitner agrees. “Of the friends I know who have started, none has stopped. You can measure your progress so quickly. Every time I come, I lift a little more.” For those who like a workout buddy, it’s an incredibly social way to sweat. “Because you’re rarely out of breath, you can chat with people while you recover between sets,” Leitner says. “You’ll often have a big group of people crowding round you cheering you on with a big lift. I know I can always ask someone for help if I’m not feeling confident about a move.”

The macho show of swagger in the weights room is still there — it’s particularly hard to ignore at specialist lifting gyms such as Metroflex. While I practise with Leitner, there is a man actually woofing as he rolls a tyre as broad as his own shoulders around the room. “It’s a strange atmosphere,” says Rosie Whiting, 23, who started powerlifting a few months ago to try and soothe a hip problem. “Sometimes I am the only girl in a room full of 20 massive men. It used to be really intimidating, but now I’m used to it.”

With more and more gyms offering choreographed classes such as BodyPump that segue easily into more intense weight training, lifting is edging its way into the mainstream. The likes of Michelle Obama (whose powerful arms have their own Tumblr page) and Kelly Brook (see Instagram for posts of her impressive deadlifts) are singing the praises of pumping iron. Check your Facebook for statuses boasting of PBs from #backday, Vines proudly documenting big lifts, and the pervasive “do u even lift?” meme. “The tide is definitely changing,” says Rifkin, who has also noticed the change at Lomax. “Nearly every woman who trains with us now includes weight training as one, if not two, of her workouts with us per week.”

Back at Metroflex, the man with the tyre comes up to us, complimenting Leitner on her squat form. He asks if we’re done with the weights yet. “No, sorry,” she says, politely but firmly. “We’ve got four more sets yet.”