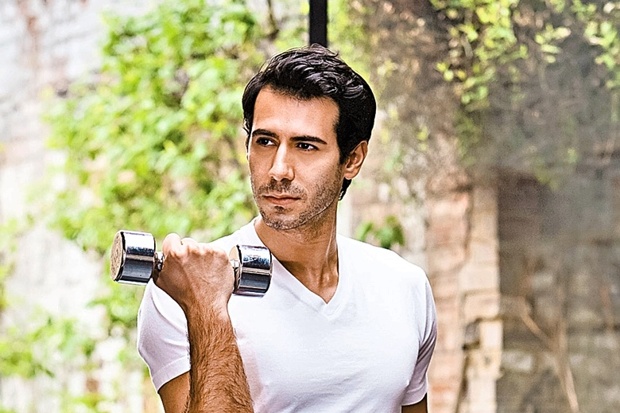 Training for short periods at a snail’s pace is the latest route to a toned body, says Peta Bee

Never before have I done a gym session wearing a dress nor have I repeatedly been told to slow down. And then slow down even more. This is a workout unlike any other. It has captured the attention of celebrities like Sharon Stone and Uma Thurman, and has now launched as Rev5 in the UK . The first gym is opposite Windsor Castle in Berkshire, and the team behind it plans to open more.

It is a style of training that allows you to slip a workout into your coffee time without breaking into a sweat. Its premise is that lifting heavy weights at a snail’s pace for just 15 minutes once a week will build unparalleled levels of muscle strength and tone. Just one session a week is recommended at Rev5, as the high intensity of the lifting can leave you floored, meaning it takes days to fully recover. However, you can top up with up to three slow workouts a week at home.

The key thing is to allow your muscles time to repair and rebuild with adequate rest between the weights sessions. Super-slow resistance training is being billed as the most essential exercise approach for anyone the wrong side of 40 — and not just by the gym industry. I’m being guided through my first session by Dr Tahir Masood who became convinced of the health benefits after seeing how well it worked on patients with diabetes and other chronic illnesses that come with age.

In the US, it’s the workout approach of the moment, with high-profile trainers like Adam Zickerman, whose clients include A-listers like Stone and Thurman, advocating that we wind down the rate at which we lift weights — and so make fast progress. What really appeals is the way in which slow weight-training transforms your physique. Unlike the hard-worked, sharp-edged look achieved with endless repetitions of light weights, or the chunky appearance which comes with lots of very heavy weights, the result is a more subtly toned effect that occurs within three weeks.

Celebrities love the fact that their bodies look firmer and leaner with exercises that take so little time. It’s in contrast to the trend for endless, fast repetitions of light weights popularised by the likes of Tracy Anderson, who trains Cameron Diaz and Gwyneth Paltrow.

Like Dr Masood, Zickerman is convinced that slow-motion fitness has more than aesthetic value. “Workouts have become all about speed but, when it comes to resistance work, it is really not necessary for optimal results,” Zickerman says. “By slowing down you eliminate 90 per cent of the injury risk that comes with jerky movements, and your muscles also get much more tired by decreasing acceleration so that training effect is boosted.”

A Rev5 session entails just 15 minutes of lifting weights on five different machines — a compound row, torso pull-down, shoulder press, chest press and leg press — which are neatly positioned in the company’s first studio. The machines are the same as in any gym. Weights on each are adjusted to individual capablities and increase slightly with every session “so that you are always overloading your muscles,” Masood says. A clock ticks in front of you as you aimto take ten seconds to lift the weight and then ten seconds to lower it, continuing for as long as your body will allow, which is usually about 90 seconds to 3 minutes for each exercise. It’s much harder than it sounds. There is a tipping point at which your quivering muscles seem unable to perform another repetition, but that’s when it is important to push on.

A few minutes in and I begin to feel the kind of muscle fatigue I only usually experience after an hour-long gym circuit. This, says Dr Masood, is normal. “People find it tougher than they expect,” he says. “Not just physically but mentally, as it takes the same sort of psychological willpower to overcome muscular fatigue as it does to continue running when you want to walk.”

Interest in slow weights among the medical profession was sparked about 30 years ago when exercise physiologists at the University of Florida, led by Ken Hutchins, discovered that the approach helped to maintain bone mass in women with osteoporosis. Since then, researchers have found that weight training is the most effective means of slowing down the natural withering of muscle mass that occurs from the age of 35. Sarcopenia (Greek for loss of flesh) it is to muscles what osteoporosis is to bones: a sly, destructive condition with a potentially catastrophic effect. Most people are unaware that it is even happening, yet on average 90g (3oz) of muscle is lost each year from the age of 40 (men’s naturally greater muscle mass means they experience a sharper decline). Beyond 50, sarcopenia bleeds the body of up to 500gof muscle a year, and someone in their seventies who does no exercise typically has one third less muscle mass than a 25-year-old.

“Loss of muscle can have a devastating impact on health,” Dr Masood says. “It is likely to raise blood lipid levels and body fat, particularly the visceral fat that accumulates around vital organs, which is partly why sarcopenia has been linked to obesity and heart disease. It has also been shown to affect insulin resistance and the onset of type 2 diabetes.” Lower levels of lean muscle tissue mean that the body’s metabolic rate — its ability to burn calories — slows down, and since stronger muscle tissue helps to keep bones healthy, advanced sarcopenia could also lead to ostoporosis, studies have shown. Lifting weights that are at least 70 per cent of the maximum you could manage has have been shown to be by far the best preventative measure for slowing down such losses.

Pushing against a heavy resistance triggers tiny tears in myofibrils, the proteins that cause muscles to contract. Cells are activated around the area where this micro-damage occurs and the body recruits protein to repair and strengthen the muscle. In short, resistance training acts as a catalyst for muscle growth. Avan Aihie Sayer, a professor of geriatric medicine at the University of Southampton, says: “You can’t stop sarcopenia, but you can modify the way you lose muscle which, in turn, may enhance the way you live your life.”

My session ends with muscles quivering more than they have done in ages. I am told not to return for at least six days as my muscles “need that time to repair and rebuild”. Next time, the weights I lift will be heavier, although I will barely notice it, Dr Masood says. “I have a lady client who is 78 and has been trialling the method for a year,” he says. “She is now pushing weights that are considerably heavier than our average 45-year-old client can manage. Strength builds strength.” It’s not cheap (£50 a session or £165 a month) but the following day my body aches as if I had run a half-marathon. I will be back.

www.rev5.co.uk
How to do the superslow workout at home
1. Select dumbbells that are heavy enough to cause fatigue after 90 seconds of lifting, but not so heavy that you begin to falter sooner than that. For women, a starting weight of 3-7.5kg is recommended; for men, 5-12.5kg. If you are using leg weights machines at the gym, you can generally push heavier weights because the machines support you as you press, so they require less engagement of core muscles.
2. Position a stopwatch or metronome in front of you before you start (you can download free metronome apps for Apple and Android phones). The idea is to count ten seconds as you push up and ten seconds as you push down. Continue for 90 seconds at this pace.
3. Repeat the circuit two or three times a week, selecting five different moves each time. You can also use machines in the gym.
4. As you get fitter and stronger, maintain the pace of lifting, but gradually increase the weight and extend time taken for each exercise to three minutes.
The exercises
Weighted lunges: Hold a dumbbell in each hand and take a big step forward with the right leg so that the left heel comes off the floor. Get your balance and bend both legs to lower your body to the ground. Pause when the back knee is almost in contact with the ground and push back up. Make sure your front foot is pointing forwards and your front knee is over the foot at all times. Repeat for 40 seconds on one leg before changing sides.
Bicep curl: Hold a dumbbell in each hand and stand with feet shoulder-width apart. Engage your abdominal muscles and raise the weights by bending your elbows, palms facing the body. Curl the weights up towards the shoulders, keeping elbows close to your trunk. When the weights reach chest level, slowly uncurl back down.
Reverse fly: Hold a dumbbell in each hand and lean forwards 45 degrees, maintaining a straight back. Without locking your elbows, raise your arms from below your chest to level with your shoulders. Return to the starting position, being careful not to “shrug” the weight, and repeat.
Weighted squat: Hold one dumbbell in each hand. Stand with feet shoulder-width apart and feet firmly planted on the ground. Flex from the hips, keeping the weight in your heels to prevent you toppling over. Stick out your bottom as if you are preparing to sit on a chair. Keep lowering until your knees are bent at almost 90 degrees, making sure your back remains straight and your head is aligned. Slowly raise back up to the start position.
Shoulder press: Hold a weight in each hand. Raise the dumbbells to shoulder height, with your palms facing away from you. Push the dumbbells upwards until your arms are extended and the weights touch at the top. Slowly lower the weights back to starting position, and repeat.